This recipe will make use of ready-made dumpling wrappers that you can usually buy from most grocery stores. For the chicken filling and the sauce, they are best tasting when homemade with fresh ingredients.

Let’s say it out loud, store-bought frozen dumplings just don’t taste like freshly made. Not even takeout is as fresh anymore.

The best tasting dumpling I've ever tasted was from a food hawker during a trip in Singapore. And from then on, my life is not complete without them. I can eat them anytime of the day.

I've tried every recipe there is for dumplings but there's no recipe that can suffice. So I made my own recipe. I can't compare it to the dumplings from that hawker, but it's nearly similar.

What are Chinese Dumplings?

Let’s start from the beginning. Chinese people love their dumplings, and it’s easy to see why. There are no specific rule in making the dumpling fillings.

You can actually make them with any seasonal vegetables and proteins, may it be chicken, pork, beef or turkey. You may go with all vegetarian ingredients as you see fit.

And there's more than one technique that you can cook them. If there’s something true, it is that no two dumplings are alike — there’s an entire universe of them!

Most dumplings are filled with aromatics like garlic and ginger, veggies, including crunchy cabbage, and a protein, whether that’s seafood, beef, pork or chicken. Chicken dumplings are amongst the most prominent. Who doesn’t love chicken’s familiar flavor?

The thing with dumplings is that there are many types of them, and each is special in a way.

We’ll cover the most common types of dumplings and how to cook them in a second, but for now, know there’s no one Chinese dumpling but many. It comes without saying dumplings go back for at least 2,000 years, which is the cause of so many variations.

Types and Shapes of Chinese Dumplings

Dumplings can be classified by the type of wrapper, most likely made with either wheat or rice flour. We can also classify dumplings for their filling.

Finally, you can divide dumplings by their cooking method, as they can be steamed, boiled or pan-fried.

Jiaozi is a catch-all term for Chinese dumplings. The term can roughly be translated to “tender ears” — these delicious dumplings sometimes resemble tiny ears, after all. Talking about the dumplings’ shape, we can also divide Chinese dumplings into two categories:

Regional variations also exist, and these are the ones most commonly found on menus:

Tips for Making the Perfect Dumplings

Here are some tips to make the perfect Chinese dumplings, whether you follow the easy recipe for Chinese chicken dumplings below or any other.

Dumpling wrappers have a mild, starchy taste not dissimilar to pasta. It’s the texture that makes dumplings so irresistible. The flavor, though, comes from the dumplings’ filling, and that’s magic right there.

What’s the difference between potstickers vs. Dumplings?

Potsticker is a foreign term often used for moon-shaped, pan-fried dumplings, and the wrapper is often paper-thin. On the other hand, Dumplings come in dozens of different shapes and sizes. All potstickers are dumplings but not all dumplings are potstickers.

What’s the difference between gyoza vs. dumplings?

Gyoza is a Japanese dumpling, usually filled with pork, cabbage, spring onion and garlic. Wheat wrappers are common in gyozas, and people regularly steam and pan-fry them.

What Sauce to Serve with Chinese dumplings?

Just like there are many types of dumplings, you’ll find diverse sauces for Chinese dumplings as well. Chinese hot chili oil is typical, and so is a mix of soy sauce and ginger. Sesame seeds and oil are common ingredients in most traditional dumpling sauces, and the sticky hoisin sauce can add sweetness and richness to and dumpling sauce. Experiment with your own sauce!

For the chicken dumpling recipe:

For the dumpling sauce recipe:

You can learn ways to fold dumpling here.

For the Chinese dumpling sauce:

Recipes in the blog you can eat with Chinese dumplings: 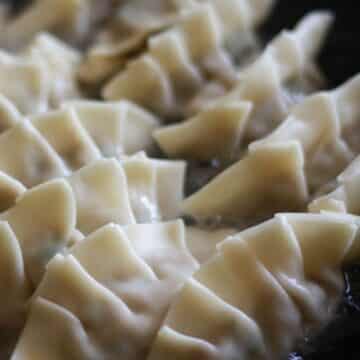 to fry the dumplings